An equation relies on the word “equal” so an equation is simply a math statement that includes two, or more, things being set equal to each other. For example, 3+2 is not an equation, but 3+2=5 is an equation simply based on the equal sign. This holds true even if it uses letters, symbols, or the Greek alphabet instead of numbers.

The general form of a linear equation is y = mx + c. This equation gives us some key information about the linear equation meaning. The slope is represented by m and the x-intercept is represented by c. So in the equation y = 3x + 2 it is already known that there will be one point at (0, 2) and the slope will be 3. Remember slope is “rise over run” so a slope of 3 would mean rising or going up 3 and running or going to the right 1. From this, another point on this line can be found by adding 3 to the y value (the rise) and 1 to the x value (the run). Another point on this line would be (1, 5). If the dots are connected and the line extended in both directions, a graph of the linear equations has been achieved.

The general form of the linear equation can be re arranged so it might look different. It might appear as:

Each of these can be rearranged to get it back to the more desirable y = mx + c format. Other linear equations might appear to be missing a part: y = c or y = mx, for example. In these cases, the missing part must be equal to 0. If the linear function is in y = c format or even x = any number this is considered a constant function or identity function. If the y = c then the line will be horizontal or flat. For every value of x the y value will be the same. If it is x = any number then the line will be vertical. For any value of y the x value will remain the same.

The easiest linear equations are the constant function or the identity function where y = c or x = any number. In real life, this might be an age in years for any month that doesn’t include that person’s birthday. It will remain constant throughout the month. Here are some linear equation examples:

Just because an equation has two variables doesn’t always mean it will be linear. There could also be a parabola (y = x squared – 3) or a circle ( y = 2 = the square root of (25 -x)). Remember if the graph has any type of curve and not just a line, then it will not be considered linear. We call these types of equations non-linear.

For linear equation examples with four or more variables, it is apparent that someone could simply add more meals, snacks, or drinks to the above equations. They could also subtract calories burned off when working out. 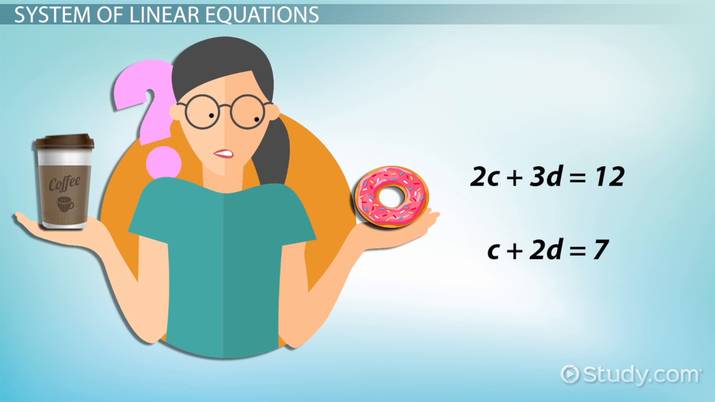 I want to use rideshare and I have two different apps available. One has a higher initial cost to pick me up than the other, but it also has a lower cost per mile. I need to know which one will cost me the least amount of money. Option A: Pick up costs $1 and $0.20 per mile. Option B: Pick up costs $2 and $0.15 per mile. I can use this information to create two linear equations.

I could plug in the number of miles for each to determine which is cheaper this time. Or I could solve the system of equations so I will always know at what point I should switch from one company to the other.

I want to open a lemonade stand and I need to buy lemons, sugar, and cups. I have $20 to spend. What is the maximum amount I can buy?

For every 6 servings, I need 6 lemons, 1 cup of sugar, and 6 cups. I need to balance my shopping to maximize the amount of lemonade I can make. I don’t want to end up with extra lemons and sugar and no cups to serve it in. These are just some examples of when it is helpful to understand systems of linear equations.

If we are told all equations are said to be true, then there are three possible outcomes when solving a system of linear equations. It might be found that there are no solutions, exactly one solution, or there is an infinite number of solutions. This is true, no matter which method is used to solve the system of equations:

If all of the equations given can be rearranged into the exact same equation or graphed and displayed as the same line, then one can say there are infinitely many solutions. It doesn’t matter what number is put into it, a solution to the linear system will always be able to be found. This is considered a dependent system of equations.

Want to join the discussion?
Feel free to contribute!